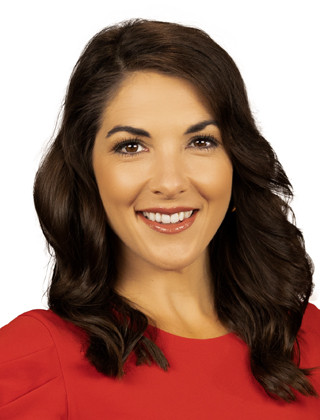 Holly Menino is an award-winning journalist with almost 15 years of broadcast experience.

Holly joined KOMO in June of 2019 as a morning show anchor. Holly grew up in the small Eastern Washington town of Waitsburg and is a proud graduate of the Edward R. Murrow School of Communication at Washington State University. Go Cougs! Being back in her home state and working for KOMO is a dream come true.

Holly started her career in Roseburg, Oregon and then went north to Eugene where she reported, produced and anchored. She started anchoring mornings in the summer of 2008 and has been on a morning schedule ever since. In 2012, she left her anchor seat in Eugene for Salt Lake City, Utah where she joined a legacy morning news team as a third anchor. Holly spent six-and-a-half years in Utah honing her reporting and anchoring skills.

While in Utah, she created the station's Science, Technology, Engineering and Math (STEM) franchise, launched the station's first "Live Desk" position, and help start a podcast centered around children called "Baby Your Baby." Holly's had the privilege of covering major news stories, from the field and from the anchor desk, including a massive landslide in North Salt Lake, Utah, a high school shooting in Roseburg, Oregon, and an assignment in China.

Holly is not only a passionate journalist, but also a dedicated member of her community. If she's not covering breaking news you can find her emceeing community events or spending time with her husband and two children.